Trølpind is an interactive installation made for the children’s area at the library Hjørring Bibliotek. The basic concept is to pick up a wand (not a Move controller) and cast colourful spells by making gestures. Three players can cooperate and trigger special effects if they do the same gestures at approximately the same time. There is no winning or losing, it’s just about playing around and having fun.

Image processing
Image processing was used for detecting the wands through color thresholding, neighborhood processing, BLOB-analysis, and morphology, which was done in OpenCV.

Gesture recognition
Since we wanted automatic gesture recognition without the use of buttons, it was really hard to design something that felt intuitive. First we tried with a time-based system, where gestures would be recognized every 4th second, but that felt wrong, since nobody really understood what was going on, making it unintuitive. So instead, we made a system based on continuous gestures. If the user makes the same gesture several times in a row, he probably wants to trigger a particular spell. This worked out much better, and the cooperative spells were much easier to trigger.

The wand
In the beginning, we wanted to detect the wands by infrared reflection to avoid electronics on the wand, however as it was difficult to distinguish each wand from each other that way, colored diodes were used instead.

How we wanted to detect infrared if we could distinguish the wands from each other: 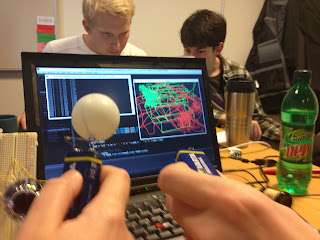 Colored diodes were easier to work with, since we could label the wand in the code by finding its color. In the beginning we thought that colors from the environment and clothing would interfere, but since the light from the diodes are so much more intense, it was not a problem to isolate them from everything else.

Since we wanted a more robust wand that couldn’t be seperated as easy and recharbeable batteries, we took a flashlight and modified it.

We didn’t want the wand to look like a flashlight and we didn’t want it to be seperable, so we attached some “tape” that you would normally use on the grip of tennis rackets. 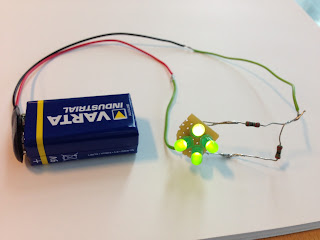 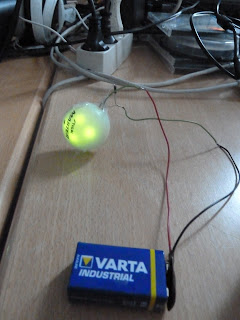 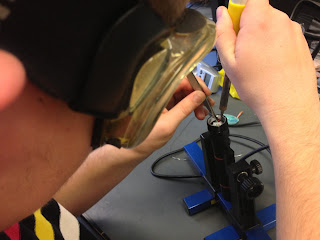 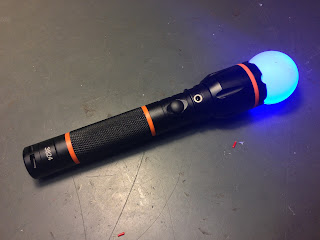 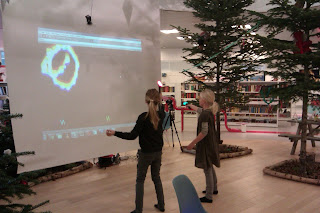